DRAMA FROM THE HIGH FLOOR 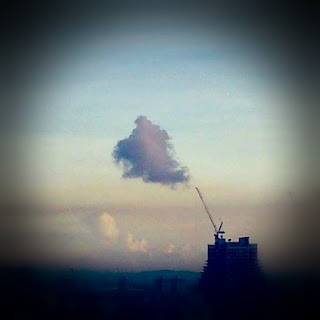 Sure enough the rainbow was forewarning for stormy days ahead. The day after it appeared Dad became obsessed with dust in our living room.

“The entire apartment is coated in dust,” he claimed. “It comes in via the kitchen window and the air carries it through the living room.”

“The walls, furniture and floor are plastered with brown particles!”

The trouble is, we (our helper, Mum and I) don’t see any dust particles. Mum is OCD.  Dust has zero chance of survival in our home, especially if the dust is as thick as Dad describes it.  What got Dad really upset was when I recommended that we set up an appointment with the eye specialist.

On Saturday morning, Dad demanded that I lodge a complaint with HDB.  To appease him, I did.

On Sunday afternoon, under Dad’s watchful supervision, I dragged a vacuum cleaner around the living room for almost an hour, paying close attention to every nook and cranny.

But Dad wasn’t the least satisfied. On Sunday evening he threw a violent fit.

Dad: The dust is so thick. It cannot be good for anyone’s health. I just don’t understand how you can say you don’t see it!

Dad: Do you or do you not see it?  Don't lie!  Listen to your own conscience!

Dad: (hysterical) The entire place is coated with dust!  You keep saying you don't see it!  But I see what I see.  It is there but you say it isn't!!!  All of you - 3 against 1 - conspiring to make me think I'm crazy!

Dad: (repeats above for 25 minutes)

After 3 dramatic days, I began to see. That perhaps this is the onset of dementia. A friend once advised that a dementia patient often suffers from hallucination. He sees what he sees and truly believes in it. To avoid conflict we must not try to dissuade or show signs of disbelief. Instead it is important to VALIDATE. So if he says he sees mice in the bedroom we should ask “how many?”

Now we’re doing just that. Our helper, Naw, has been cleaning the living floor twice (sometimes thrice) a day. It seems that the episode has temporarily come to pass. Until the next episode.

For more drama from the high floor, watch this space.

Email ThisBlogThis!Share to TwitterShare to FacebookShare to Pinterest
Labels: dad, The life of a crab