THE NIGHTMARE: A HALLOWEEN SPECIAL

Got out of bed at 8:17 this morning and found my parents all dressed up and ready to go out.  I drifted to the living room couch and started to flip the newspapers. Mum, who cannot resist any opportunity to offer me a snide remark, pounced on me immediately, “How can you read the newspapers without first washing up?” To which I retorted, “Is there a rule that says one has to wash up before reading?” Of course she had to have the last say, “Yes there is and you must be the only person who doesn’t follow it!”

After my parents had left the house, I took the time to make myself breakfast and spent a quiet morning listening to Joan Baez’s Diamonds & Rust. I cleared the kitchen cabinet of expired baking ingredients, and cleaned out some old clothing to put in a recycling bag for the Salvation Army. If my mother was home she’d complain, “吵耳到死!” to the music. Then she’d shake out everything from the recycle bag and scrutinize every item with comments like, “What’s this?! When did you buy this? How come I wasn't aware that you bought this? I’m quite sure you wore this only once! This looks new, I want to keep it.”

Had lunch with my aunt then accompanied her to Park Mall to shop for chic furniture pieces for her living room.

Returned home to find that, alas, peace does not reign forever.

Mum served dinner at 5:25pm instead of the usual 5:15pm. Dad threw a tantrum and refused to eat. He now sits in a darkened living room, sulking. He accused Mum and I of making him angry to shorten his life when in reality, he's the one driving us to the brink of suicide.
at October 26, 2013 No comments:

Email ThisBlogThis!Share to TwitterShare to FacebookShare to Pinterest
Labels: dad, mum, song and poetry, The life of a crab

Here's a rundown of my week.

Tuesday Oct 15, 2013:
Hari Raya Haji and a bank holiday. My co-worker, Ravleen, came over to my place and we baked cookies!  Here, am sharing two photos from Ravleen's camera. 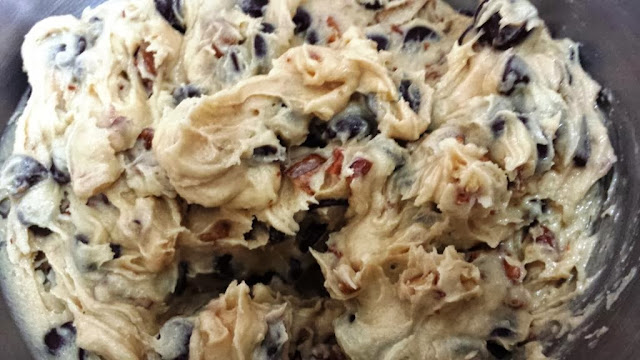 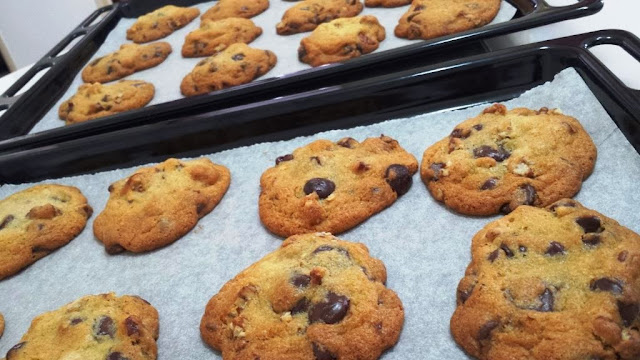 The finished product - chocolate chip cookies with pecan and walnut.


Wednesday Oct 16, 2013:
Stephane is back in the office after travelling for exactly one month. He brought several goodies from France.  I like the Salted Butter Caramels best!  At first Stephane said he does not like caramel but I made him try one and he agreed they were good.  I overheard him telling Michel, "I normally don't like caramel but just because of the salt they become amazing!" 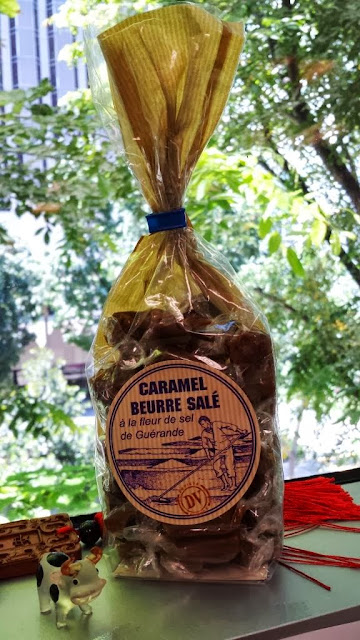 It's Stephane's first day back at work after a month so there was lots to catch up on.  Tons of calls to organize, meetings to set up.  He needs a new China visa.

Dad threw a tantrum over a dish that Mum cooked for dinner. The dish was minced pork steamed with preserved mustard (梅菜猪肉).  Dad complained that the ratio of preserved veggie to pork was out of proportion.  Dad accused Mum of mistreating him, refused to eat dinner and went about the house destroying stuff. Such violent anger bouts are frequent. Two weeks ago, he saw red because he kitchen door wouldn’t shut properly.  Then there was the time he became flew into a white rage because Mum went to the wet market in the morning and didn’t get home within his stipulated time.  We live with a time bomb everyday.

Friday Oct 18, 2013:
I love Fridays.  Friday is when Rheena goes to the Indian temple and returns to the office with breakfast for all of us!  She used to bring only vada and sambar (vegetable stew) but recently the menu has expanded to dosa (crepe), chutney, pongal (rice) and Puliyodharai (tamarind rice).  I ❤️Indian food! 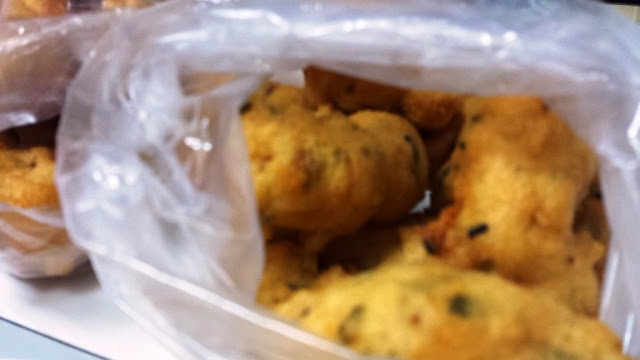 vada (some call it vah-day) 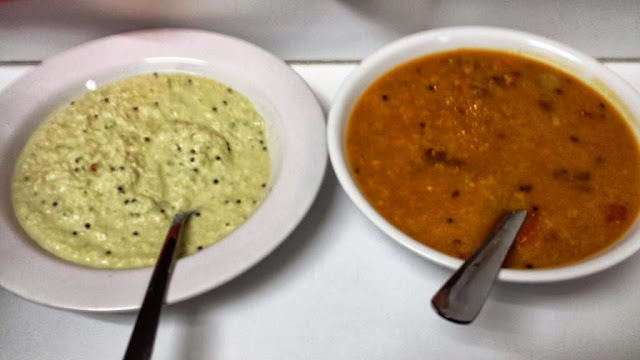 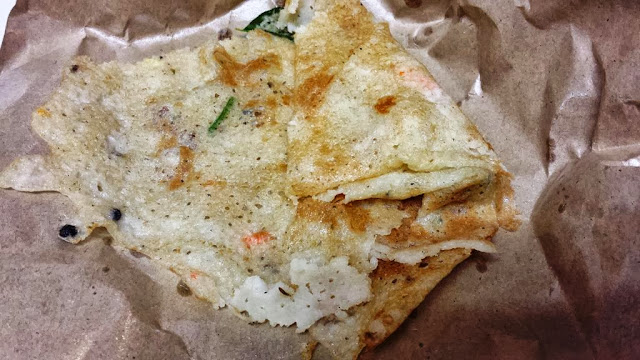 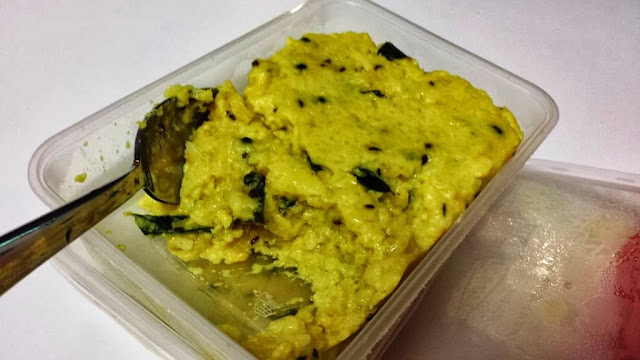 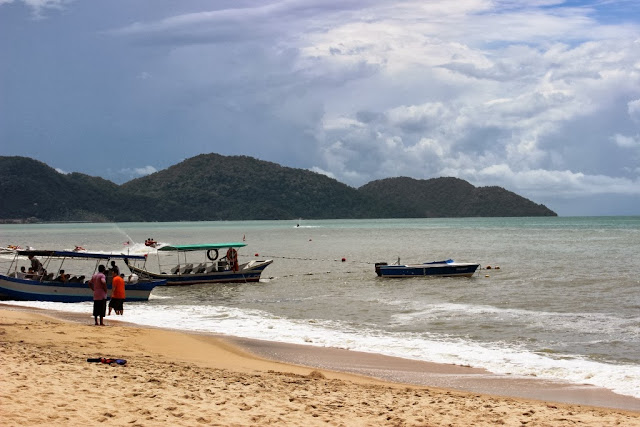 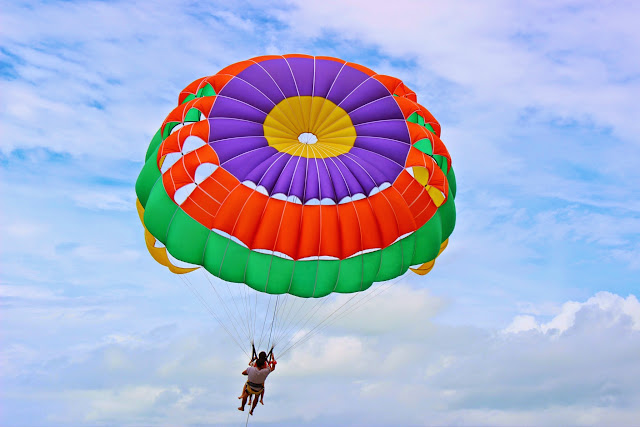 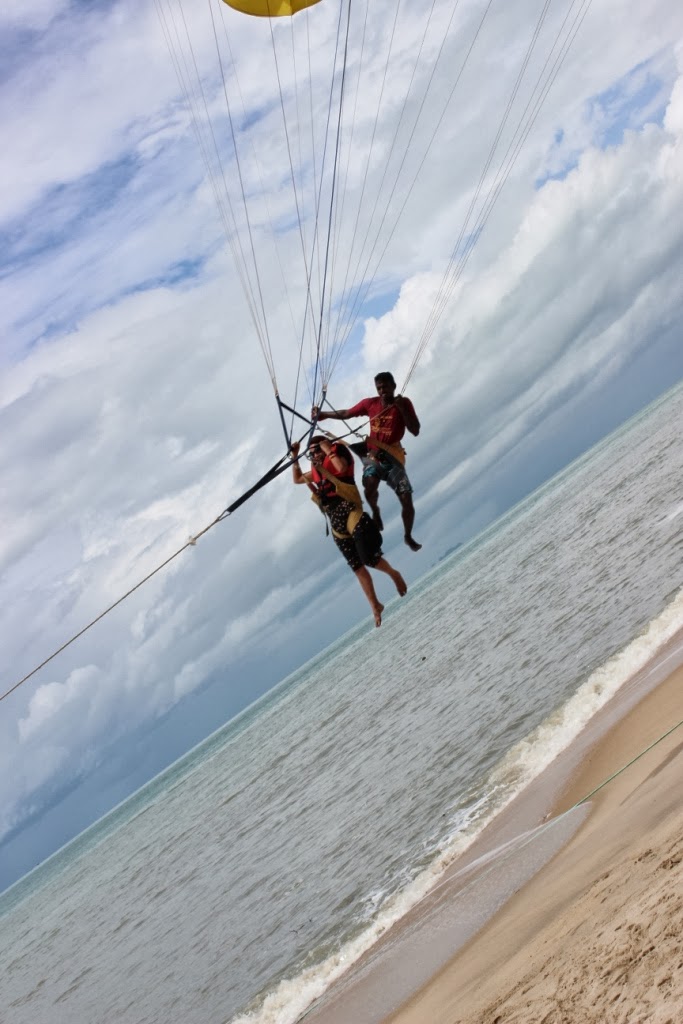 That’s Elaine up there. What can I say? She’s up for anything!

PENANG HILL 升旗山
About 6 kilometres from the city centre of Georgetown is Penang Hill. You need to take a 10-minute train to get to the top of the hill. A return ticket on the Swiss-made funicular train is MYR30 for tourists. MYR8 for locals. It was raining hard so we didn’t explore. Apparently there is much to see – a bird sanctuary, canopy walk (suspension bridge over the tree tops) and guided nature trails. Maybe next time!

STREET FOODS !
If your idea of a good holiday is fine dining, and being stuck in air-conditioned malls then Penang may not be the place for you.  Penang is where street food rules.  It'll be pointless to go to Penang and not dine al fresco.  I'm glad I have like-minded travel companions.

Fried chicken from the Indian stall at the corner of the street?  On!

Wait 25 minutes for a plate of fried kway teow?   No problem.

No tables at the famous chendol stall?   Do what the local does – slurp from bowls while standing by the road.

Oh, how we enjoyed the street food!  It's no surprise that Penang was ranked by CNN Travel as one of the top ten street food cities in Asia.

Hokkien Mee (Prawn Mee)
This Prawn Noodle is very popular and usually sold out by midday. We were fortunate to have met Stanley and hired him as our driver. He went to the stall early to place our orders before picking us up at our hotel.

Stewart Lane: Lor Mee
Located just beside the century old Goddess of Mercy temple, the stall has been operating from the current location since 1957 until the present. This Hai Beng Lor Mee is currently being run by its 2nd and 3rd generation direct descendants. This Lor Mee brings back some good childhood memories of my grandmother and I, slurping lor mee while seated on low wooden stools outside the wet market on
Sunday mornings. 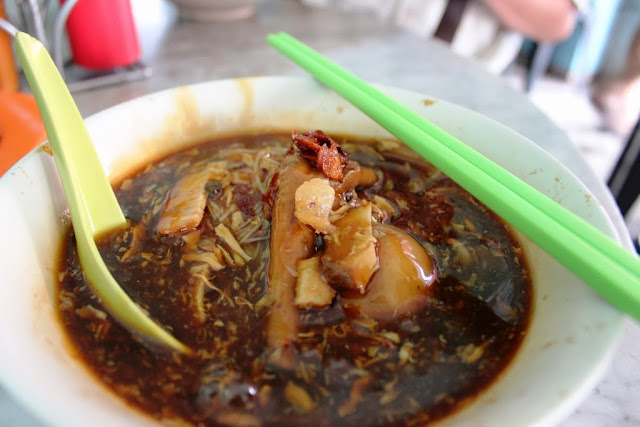 Lorong Selamat: Char Kuay Teow
We had to wait for about 25 minutes for this one.

Lebuh Keng Kwee: famous Teochew Chendul and Jooi Hooi Café Char Kway Teow
Sorry, I slurped up the chendul real quickly so I can only show you a photo of the char kway teow -- LOL!  Stanley informed us that this stall uses duck egg.  Frankly, I couldn't tell if it tastes any different from hen egg. 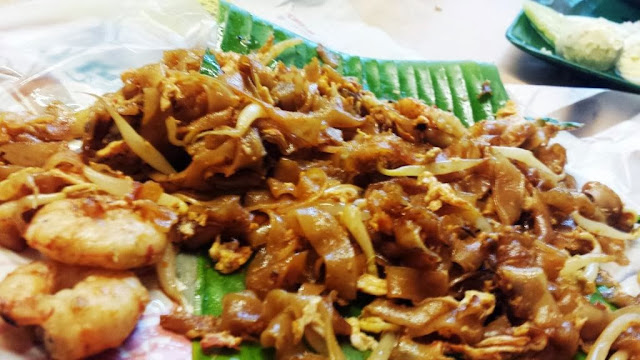 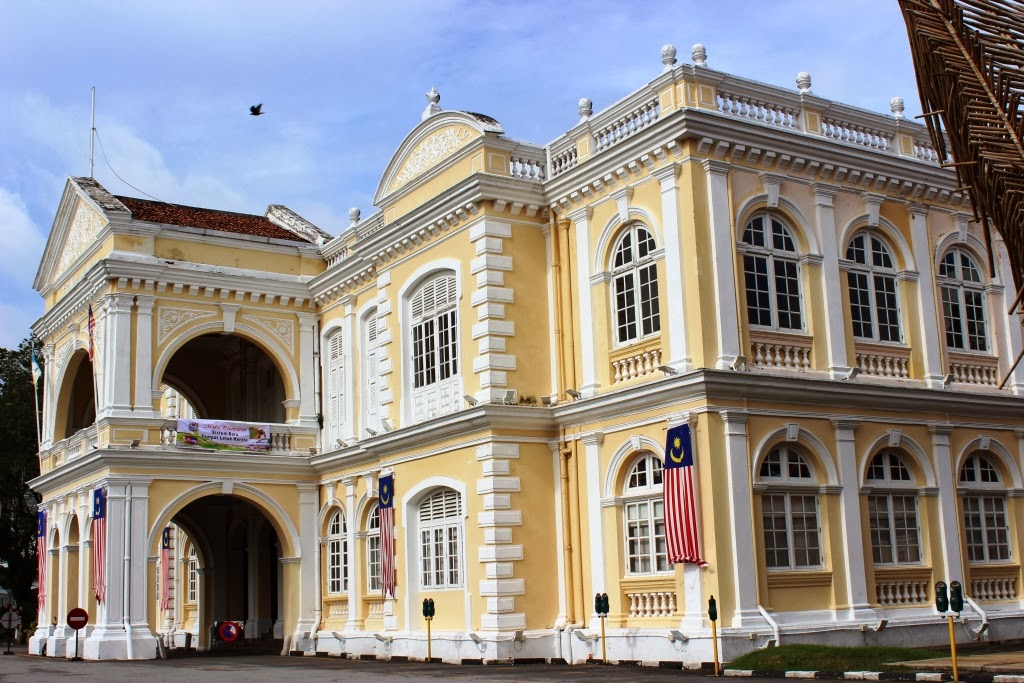 Spent last weekend in Penang with Hwee Mian, Elaine and Clarise.  We covered a lot of ground in 2.5 days! We pranced from flea market to vintage shops, leapt from beach to hill, enjoyed street art and hawker foods, explored historical landmarks.

We had such a great time, we never want to leave.

Some facts about Penang: The name “Penang Island” (槟榔屿 or “Island of the Betel Nut”) first appeared in the nautical charts of Zheng He during his expedition to the South Sea in the 15th century. Its capital, George Town was inscribed on the UNESCO (United Nations Educational Scientific and Cultural Organization) World Heritage list in 2007. Even though the town isn’t large, its population is diverse in ethnicity, culture, language and religion. I love it that the architecture is alive, with the most amazing heritage buildings in a variety of styles, including Chinese clan houses, mosques, Peranakan terraces, distinguished colonial buildings, all in varying stages of restoration. 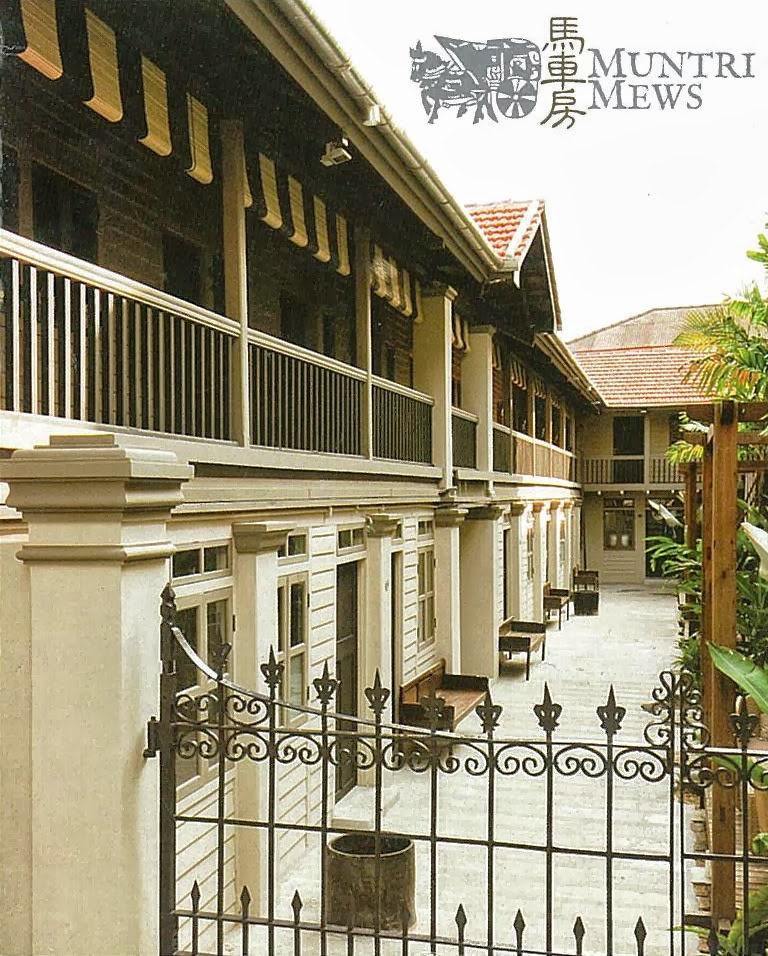 We stayed in a hotel located on Muntri Street, which has one of the best preserved row of 19th century Straits Eclectic style houses.  These grand terraces had mews, or private stables for horse carriages, with staff quarters upstairs.  Muntri Mews is beautifully restored, infused with Malay, Chinese and European influences. 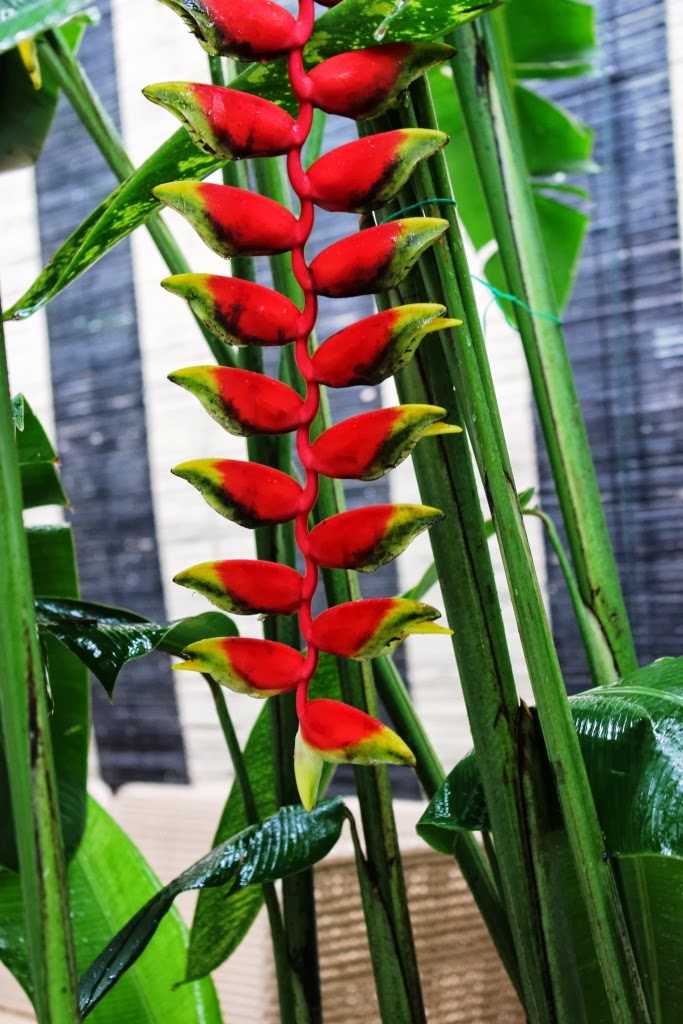 We visited a Clan Jetty. What’s a Clan Jetty, you ask? A clan jetty is a Chinese settlement on the waterfront built by immigrants the mid-19th century. Being fishermen or coolies who worked at the port, they preferred to live near the water so they built their houses on stilts over the water. 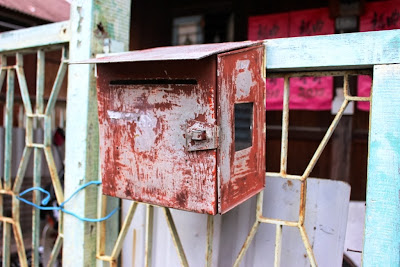 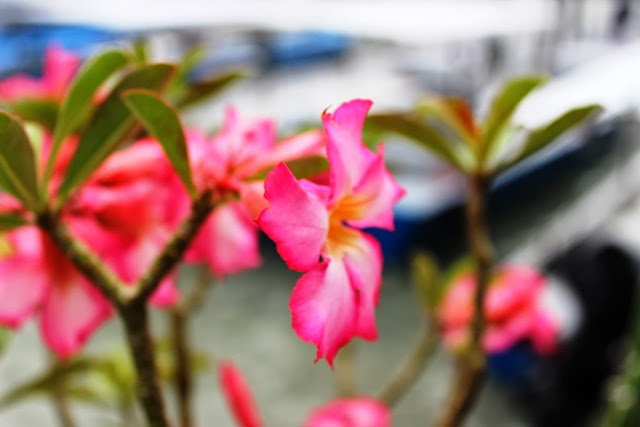 People who came from the same village back home in China ban together as a Clan and built their own jetty. The one we visited was the Chew Clan Jetty.  It is the longest and best preserved Clan Jetties along Weld Quay. 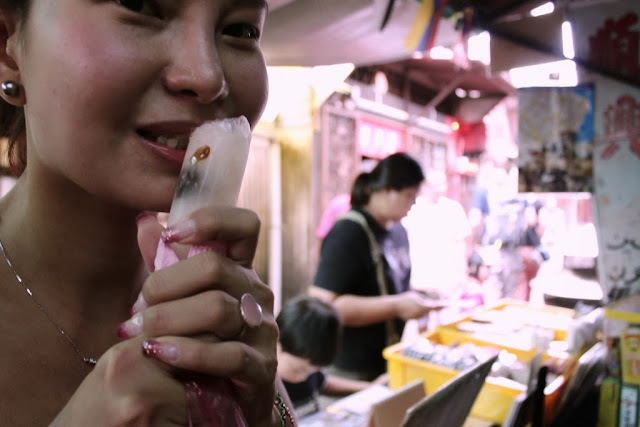 Of the places we visited in Penang, this is my favourite. Once inside I was transported back to a time when children played with glass marbles and indulged in ice popsicles.  And granny sat on her front porch and struck up conversations with neighbours who passed by. “Children on the Swing” by Penang’s deaf and mute artist Louis Gan. The road sign “Step by Step Lane” is installed as part of the art work and is not an actual road sign.

“Children Playing Basketball” by Louis Gan. This piece of art work is perceived as sloppy by critics and general comments are “The girl seems to be levitating, like she's on helium, while the boy is way out of proportion”.

MY LUCKY DAY - TREATS FROM MAKI AND KEN 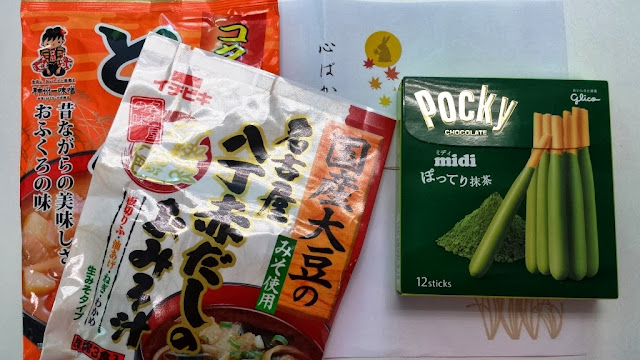 This morning, I came into the office to find a beautifully wrapped gift on my desk.
Treats from Tokyo! Arigato, Maki! 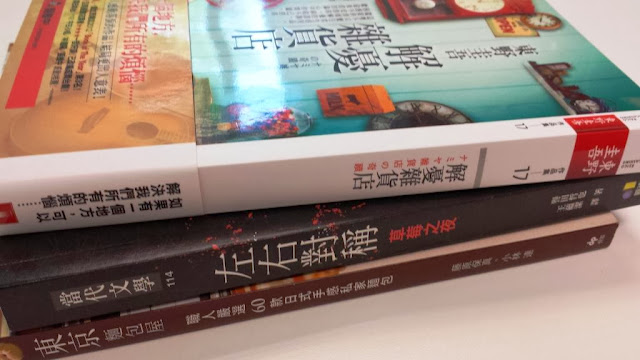 Ken brought my books back from Taipei.  Have waited a little more than a month for them because I'm cheap and didn't want to pay for delivery to Singapore.  Instead, I had them sent to the office in Taipei and there they waited, until Ken stopped by on his way to Honolulu. 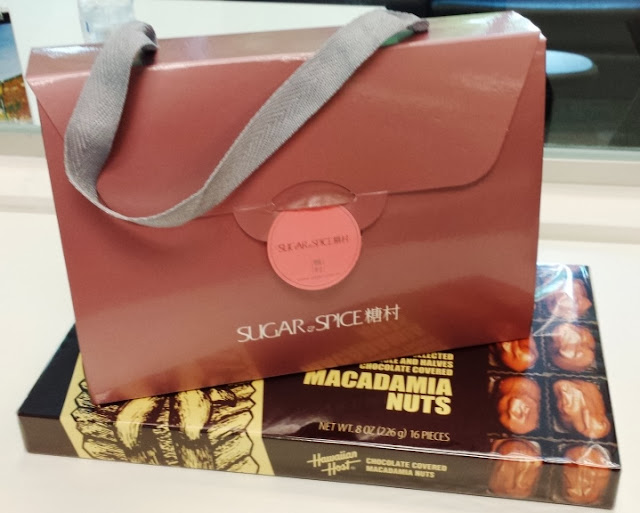 A box of chocolates all the way from Hawaii.  And dee best almond nougat from Sugar & Spice!
I'm not a nougat fan but these are, by far, the most delicious ones I've tasted.  谢谢 Ken Hsu!